Teach Me Life
Home Lifestyle An Irishman in New York 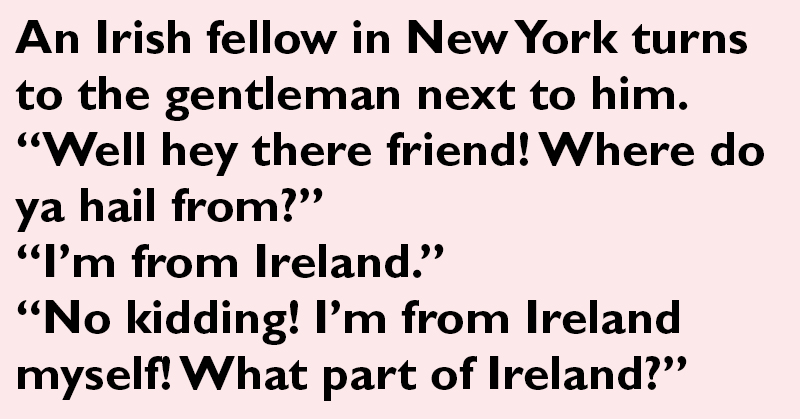 “Hey, my friend! Where are you from?”

“I am from Ireland.”

“Seriously! I’m from Ireland myself! What part of Ireland?”

“Grew up in Wexford.”

“Wexford ?! No kidding! I grew up in Wexford myself!”

“Well, what are the chances of that ?! Tell me, what secondary school did you go to?”

“I went to St. Peters Secondary”

Well as these 2 guys are just flabbergasted at the chances of this meeting, another guy at the end of the bar is watching them curiously. He calls the bartender and asks, “Hey, what’s going on over there?”

Hope this joke will make you smile! Have a nice day!! 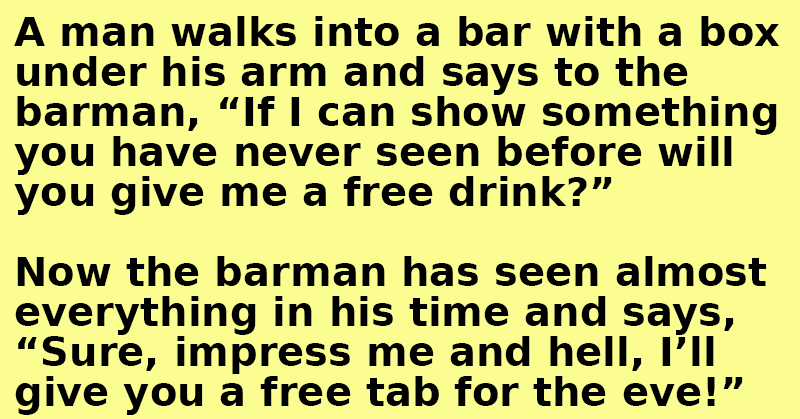 A man walks into a bar with a box under his arm and says to the bartender, “If I can show something you’ve never seen before, will you give me a free drink?”

Now the bartender has seen almost everything in his time and says, “Sure, impress me and hell, I’ll give you a free tab for the eve!”

So the man puts down the box and opens it and then he pulls a small piano out of it and places it on the bar and then a little man as well.

The little man walks up to the piano and starts playing!

The bartender was blown away by this and agrees to the drinks and then asks, “Where did you find him?”

Go back into the box and pulls out this old brass oil lamp.

“I rubbed it and a genie appeared and granted me one wish, then he told me to pass the lamp on to the next person that did me a kindness.”

The man then said, “As you gave me a drink I’m going to let you have the lamp.”

“But be careful what you wish for though.”

So the bartender rubs the lamp and then makes his wish.

Next thing the bar has ducks everywhere!!!

Crapping on the bar and the floor and all over the customers!!!!!

The bartender yells at the man and says, “I wished for a Million Bucks! Not a million Ducks!”

To this, the man replies, “ And you think that I wished for a 12-inch Pianist?!”

Hope this joke will make you smile! Have a nice day!!

Only 3% Of People Can See The Odd One Out In These Images! Can You?

A blonde, a redhead, and a brunette lost in the desert

A man and his wife went to the cinema

Teacher Knows Her Student Cheated On His Test

Too Lazy To Care.